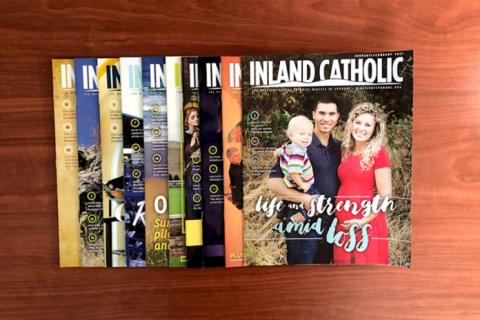 Content Evangelist chatted with Mitchell Palmquist, editor of the Diocese of Spokane's Inland Catholic, to learn how the Diocese's new magazine is helping Catholics in eastern Washington State to evangelize in a new way:

CE: Mithcell, how big is your diocese?

MP: The Diocese of Spokane is a somewhat large diocese geographically but smaller in population. We have around 28,000 registered families in the diocese or around 100,000 Catholics. Our diocese covers the eastern third of Washington state, covering 13 counties. We have 79 parishes and missions spread over our territory.

CE: Although your diocese is small, can you talk about the impact of the magazine?

MP: The magazine has given us a great opportunity to re-imagine the purpose of external communications in the diocese. In the past, the emphasis, beginning with our publication and spreading to radio production, social media and special projects, was oriented toward information sharing.

The magazine already has seen growth in subscriptions over the previous newspaper format, increasing circulation by around 10 percent in the first few months of publication. Our largest run of the magazine was mailed for Easter 2017; the diocese sent a copy to every registered household as a gift to parishioners. This large run, double our normal mailing list, gave many
Catholics in the area their first look at the new publication.

At this early stage, it is hard to measure impacts; however, despite some initial misgivings from a few longtime subscribers, the feedback from parishioners seems overwhelmingly positive.

The magazine has given us a great opportunity to re-imagine the purpose of external communications in the diocese.

CE: How does the Inland Catholic evangelize?

MP: The focus of our evangelization through the Inland Catholic is offering stories to our readers of Christ impacting the lives of ordinary Catholics. In telling stories of how Christ is working in the lives of their fellow Catholics and in the local Church, our readers are equipped with something to share. Many Catholics are nervous to share their own faith story, the hope is that the Inland Catholic encourages them to share their own faith life, but also to give them a resource to share.

MP: Initially, the Inland Catholic struggled to find stories that fit the evangelization-first approach. As a few issues have rolled out, more stories are coming to light from different areas of the diocese. This comes at a great time in the course of our diocese. We are about to begin the fourth year of our pastoral plan for the diocese called “Know, Love, Serve,” which is themed around equipping parishes to focus on evangelization and outreach. The focus of evangelization in the Inland Catholic will dove-tail nicely with the pastoral plan.

I think we are beginning to see some impacts from the new magazine, at the same time it is still early in our adoption of this format. I believe it is beneficial that the Inland Catholic is part of a broader effort to refocus communications on efforts to evangelize in our diocese.