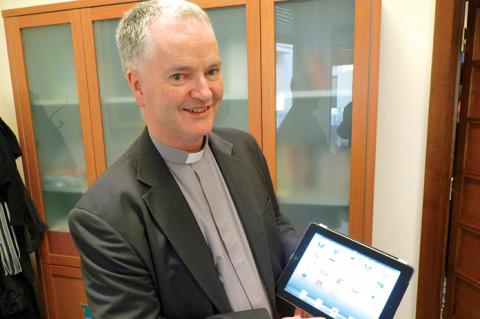 How should the Church approach evangelizing in a digital world?

“The first thing we must do is to be present,” said Monsignor Paul Tighe, Secretary of the Pontifical Council for Social Communication. “If we’re not present as a Church, we’re going to be absent from the lives – or from a significant part of the lives – of a very many people. And not just young people,” Msgr. Tighe recently told an audience of parish, diocesan and ministry staff.

Delivering the keynote at FAITH Catholic’s first Digital Evangelization Conference, Msgr. Tighe urged diocesan and parish communicators to recognize the power of digital and social media to bring the Gospel message to people. But this power can only be harnessed if the Church makes itself present in this new world.

“We live in a world that’s integrated. People are living online and offline, and they are integrated with one another, and we’re all finding that media is giving us a richer experience of the world in which we live.”

But to be effective in this new world, we must understand how to approach it. “The image that Pope Benedict XVI used was the idea of a new continent,” Msgr. Tighe said. “Just as in the past when the Church went to different continents to share the Good News, we had to understand the culture of those continents, we had to learn new languages. We were bringing, always, the same Gospel, the good news of God’s love for all people, but that had to be expressed in new languages, using new images and metaphors, that would make sense to the people we’re trying to engage with.”

Msgr. Tighe explained that a common mistake is to consider today’s technology merely a tool to keep doing what we already are doing. “Bishops come to our office and ask, ‘How do we use new media or new technology for the new evangelization?’”

A priority of the Council for Social Communication is to teach the body of Christ to show leadership in this new world. “The Church has to be present in the digital world, but the Church means all of us individually, first and foremost. So the first thing we must do is be good citizens of the digital world. Because that will show we’re trustworthy and our message is worthwhile.”

To do this, Msgr. Tighe challenged parish and diocesan staff members to help to humanize the environment. “If we want media to be social and to help to build society, then respect for one another is fundamental,” he said.

Four core values should guide the social communication of individuals and the Church: honesty, objectivity, reasoning and openness in listening. “And before we go near anything like talking about the Gospel, we have to first demonstrate that we are a power for good in social media,” Msgr. Tighe cautioned.

“As Pope Francis says, we must create a culture of encounter, where people are allowed to be people, be themselves, be vulnerable in social media. The question for us is, ‘How do we humanize that environment?’”

“Ultimately, it’s not just about the content and the transport of information,” Msgr. Tighe said. “It’s about the relationship I try to start with another person. Technology can help us, but the heart of good communications is that the heart of one individual is somehow relating to the heart of another.”

The staff of the Pontifical Council for Social Communication proposed using a Twitter account to Pope Benedict XVI in 2012. He readily agreed to use any available means to share the Gospel of Jesus Christ, and so the Twitter handle @Pontifex was launched on December 12 with the tweet:

“Dear Friends, I am pleased to get in touch with you through Twitter. Thank you for your generous response. I bless all from you from my heart.” – Benedict XVI

@Pontifex stayed with the papal office when Pope Francis was installed in March 2013. Since then, the pope’s Twitter account has been called the most influential in the world, with tweets receiving an average of 10,000 retweets in Spanish and 6,400 retweets in English. (RomerReports.com June 2014).

Most importantly, the words most frequently used in the pope’s Twitter feed reflect the true reason to use this powerful tool: God, Jesus and love. These words demonstrate the intent of social communications to build relationships and spread the Gospel.