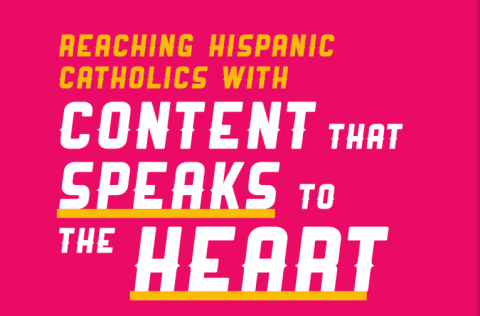 FAITH Catholic recently hosted a roundtable discussion about the needs of Hispanic Catholics in the United States. The participants in the roundtable were: Sylvia Sanchez, multicultural specialist at the USCCB; Carlos Briceño, editor of Christ is our Hope, the magazine for the Diocese of Joliet; and Father Claudio Diaz, Jr., pastor at Mission Saint Juan Diego Parish in Arlington Heights, Ill., former director of Hispanic ministry for the Archdiocese of Chicago and former vice president of the National Association for Hispanic Priests.

What are the unique needs of Hispanic Catholics?

Sylvia: There are a number of unique needs, such as learning a new language, finding their place within a new culture, having access to health care, to mention just a few; however, one that I believe to be crucial is educational opportunity.

There is one more thing I’d like to mention, and it’s more specific to Hispanic Catholics. And that is the need to find an all-embracing Church. The great majority of Hispanics coming to the U.S. call themselves Catholics, even if they are not catechized or practicing their faith. Also, Hispanics come from a different experience of Church. For example, Hispanics don't understand why they have to belong to any particular parish. That doesn't mean they don't want to comply. For Hispanics, it doesn't matter which parish they belong to. They don’t think they have to register at a particular parish. They look up to the Church, and look at the Church as a mother. One that will always welcome them and where they can find some respite from their troubles.  They say to themselves, “This is my house. Why do I have to register in my own house?”

It’s important for Anglos and Hispanics to understand that Jesus is the center. That’s who we encounter—all of us. We don’t have to pass over the center­—Jesus—to become like Anglos or the other way around. Jesus is always the center.

Carlos: One of the big needs for Hispanics is the most simple thing non-native speakers need: other people who speak Spanish and understand the culture. I have lost count of the number of times over the years when I have been called by a colleague at work or by my wife, who works at a Catholic school, in order to talk to someone who is Hispanic because they didn’t know what the person was asking for or saying.

In other words, don’t assume all of your Hispanic audiences fully understand English. Or the ways of the Church here. To truly evangelize means meeting the person where the person is and, for many first-generation Hispanics, where they are most comfortable is in their native Spanish.

Father Diaz: The content directed at Hispanics should be dynamic. It has to be something that is informative. Something that moves you. I see text messaging as something that works, whether you send a text with a little prayer or a reminder of a devotion. There are many parishes that have screens in their worshiping spaces and show material, such as video clips or public speeches from the bishop. That kind of multimedia situation is very, very much welcomed by the Hispanic community.

How do Anglo communication staffs, who may only speak English, reach the Hispanic population in a meaningful way with content?

Sylvia: For the most part, Hispanics are very hospitable; perhaps that is why they are also very sensitive to how they are received and perceived. Language is important to them, but I would venture to say that even more important than language for them is the way they are welcomed and accepted. Social support is essential to Hispanics, and this can be accomplished above and beyond language through social gatherings, food and music and family support. Smiles work wonders to communicate well with Hispanics! And there are no “vernacular smiles!” Condescension is harmful to every person, and so it is with Hispanics. We need to avoid condescending attitudes, which are sometimes unintentional, but nonetheless very real and harmful. This is even more so, and more serious, when it happens in the Church. I was once in a meeting of catechists and other Church leaders when an Anglo person referring to the Latino population said something like, “We need to be patient; in the next few years they will become like us.” The “patient” part is good, but the latter attitude needs to be avoided. We don’t have to become like anybody else; all of us—Anglos and Hispanics—need to become like Jesus Christ.

Carlos: The most meaningful way is a sincere desire to try to understand Hispanics. This goes beyond just speaking or understanding the language. It requires a degree of empathy that doesn’t occur unless you interact with Hispanics in a deeper way, such as going to Spanish-speaking Masses, understanding their various devotions and feast days that are important in their countries back home and who and how they are in terms of their cultures.

Father Diaz: Get a Spanish-speaking member on the staff. It's as simple as that. If the majority of the people you are serving are Spanish-speaking, you have to use the language. Maybe in the future the language will not be an issue, as more Hispanics settle down. That might be wonderful in the future. Maybe it will not be an issue. Right now, though, it is an issue and right now, we need to reach them within their context. There are two tools. Number one, the language. And number two, the culture. And I'm not talking just the secular culture. I'm talking the religious culture, which is their devotions, which is their spirituality, which is the society values that will reflect the Church—like family, like fidelity to God, like respect for authority and authority figures.

Sylvia: One unique category that many times is overlooked is the very classification of Latino/Hispanic. No one is “Latino” or “Hispanic” in his or her own home country. You are Mexican, Salvadoran, Cuban, Nicaraguan and so on. This is one of the first things Hispanics encounter when they move to the U.S.: a new category, which is important because it goes directly to the heart of identity. I remember the first time in elementary school when I had to fill out a form and among the categories there were “Hispanic” and “white.” I checked out “white,” but when I turned it in, my teacher told me that I was not white, that I had to check Hispanic. That was really confusing! One of the first things Hispanics have to learn is they will be identified under a new and different category.

Father Diaz: Categories that cross over: God. When we talk about God, even if it may be expressed or manifested in particular ways, it is the same. Another one that crosses over is the Catholic identity. What I have seen more and more recently is a very closed Catholic identity, like respect for life. That's very Catholic, and that's for Hispanics or non-Hispanics. The Eucharist—my goodness, it doesn't get more Catholic than that, whether you are Hispanic or non-Hispanic.

The categories that are unique are aspects like family. In North America, our concept of family is the immediate family: father, mother and children. When you talk about Hispanics and other traditional cultures, you're talking about father, mother, children, grandparents and Auntie Mary who never married and lives with us. It's the extended notion of family. So you have that as a difference.

When you talk about evangelizing, when we talk about bringing the word of the Lord to Hispanics and non-Hispanics, there's a difference in approach. For many North American Christians/Catholics, when you preach, you have to convince them the Lord is our savior. You have to open their minds and give them examples and understandings and new ways of understanding that, within everything that is going on in the world and in the Church, God is still our salvation.

When you turn that to Hispanics, you have to touch their hearts, and you have to make them feel on that level that the Lord is our salvation because it's a different approach.

What are the challenges of translating vs. unique content for language?

Sylvia: When you translate from one vernacular to another, you need to have a command of both languages in a way that you don’t fall into the trap of translating literally and thus losing the fluency or even the meaning of what you are translating. Idioms are tricky, because one sounds good in one language, but can be meaningless and even offensive in another.

Another essential thing is knowing the culture and being sensitive to the culture that will be receiving the translation. A translation that has not taken culture into consideration will be at worst wrong or at best insipid. The reader needs to find enjoyment and knowledge in what he or she reads.

This is very relevant when it comes to pastoral writing and/or translation, since the pastoral approach is not always the same.

A quick and simple for instance: “Doubting Thomas” is a widely known epithet in the U.S. Church, referring to St. Thomas the Apostle; however, that is not so in the Spanish Catholic world. You can “push” the translation, but it will not carry the same weight in Spanish. Tomás el incrédulo would sound odd in Spanish. In this case, people will put two and two together and will understand it, but it wouldn’t be culturally correct.

Want to learn more about ministering to Hispanic Catholics in the U.S.?  Visit http://usccb.org/issues-and-action/cultural-diversity/hispanic-latino/

Hispanics are a vital and vibrant part of the Catholic Church in the United States. Our earliest parishes were founded centuries ago by Hispanics. Today, Hispanics account for the largest share of growth in the American church. Parishes that offer Hispanic ministry have higher Mass attendance than those parishes that don’t have a Hispanic ministry. Yet, fewer Hispanics are remaining Catholic. They are increasingly choosing another religion or no religion. Only 26% of parishes intentionally serve Hispanics. Very few Hispanic children attend Catholic schools. Even fewer receive a Catholic publication in their own language.

In 2014, the National Study of Catholic Parishes with Hispanic Ministry was designed by the Boston College School of Theology and Ministry in collaboration with CARA, the Center for Applied Research in the Apostolate. This report, plus CARA's Winter 2015 report on Hispanic Catholics in the United States and the publishing statistics of the Catholic Press Association, prove what should be self-evident — that as a Church, we need to do a better job reaching out to our brothers and sisters who speak Spanish.

The Catholic share of the Hispanic population in the U.S. is declining

Hispanic Catholics in the United States

Hispanics are the largest ethnic minority in the United States

The oldest parish in the United States is Hispanic. - 1566 is the year the oldest Catholic mission was established in St. Augustine, Florida.