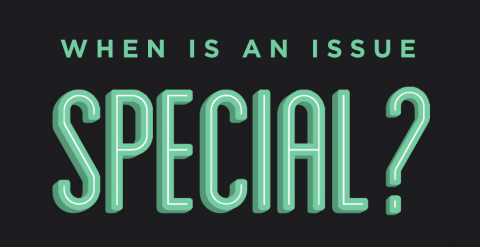 When we moved last summer, I went through every box in my basement in an attempt to ruthlessly weed out all of the detritus of our lives. “Throw it away!” was my battle cry. But then I came across some old magazines and newspapers that my mother had saved for me since I was a child. There was the first time the human race had landed on the moon, the assassinations of Robert Kennedy, Martin Luther King, Jr, and John Kennedy. And (age admission), the death of Pope John XXIII. Sadly, the newspapers were in really fragile condition and crumbled to the touch – but the magazines were still in good shape and were fascinating to read.

As Catholic publishers, we know that some moments seem to require more than our usual coverage – they are the stuff of special issues. Special issues usually have higher-than-usual readership numbers, so they can be powerful communicators.

Not every special issue needs to be about something as momentous as an assassination – or a pope resigning. With these editions of our publications, we may be doing one of two things: enhancing an impact, or softening it. An example of the former would indeed be the resignation of the pope – it called out for analysis, explanation, a review of the history of the papacy, and lots of photos. Bishop transitions in our dioceses are similar, if localized, occasions. But when we are faced with parish or school closings, the special issue can be an effective tool to give in-depth coverage of why difficult decisions needed to be made.

Here are a few special issues that got the message out:

The Diocese of Saginaw celebrated its 75th anniversary at the end of 2013 and commemorated it with a beautiful special issue filled with diocesan history, stories of Catholicism in Michigan and wonderful photography. Since the anniversary coincided with the diocese’s Planning Tomorrow’s  Parishes strategic plan, the special issue also provided a way to honor each of the parishes in the Diocese of Saginaw, some of which were going to close or merge. Readers have already indicated how much they treasure this scrapbook of their beloved communities.

The Diocese of Springfield welcomed its ninth bishop on Aug. 12, 2014. Through its special issue, the diocese was able to provide in-depth coverage of the installation of Bishop Rozanski, as well as an explanation of his coat of arms. There was also a biographical sketch, remarks from the new bishop and quotes from people who’ve known him and worked with him in the past. Since the new bishop is of Polish descent, the magazine also used this occasion to focus on its parishes that have a rich Polish heritage.

And of course, as is usually the case with a bishop transition issue, there were welcome ads from parishes, other dioceses and Catholic organizations. The magazine format provides an opportunity for these revenue-generating ads to be designed in full-color and placed in an issue that is truly a keepsake.

Raising money sometimes feels like the bane of our existence. It’s necessary to pay for the mission, but it’s difficult and not very glamorous. FAITH Magazine in the Diocese of Erie uses a special issue for its CSA every year – not just to ask for money, but to convey the important message about what happens to the money parishioners donate. For example, this year’s issue featured profiles of those people who provide services through Catholic Charities – the unsung heroes. It also profiled Catholic educators who are making a difference in students’ lives. And it emphasized that more than $2 million of the donations would remain in parishes. Through this successful outreach, the Diocese of Erie is able to fund its vital ministries.

4.  "Teaching the people", Go and Announce the Gospel of the Lord