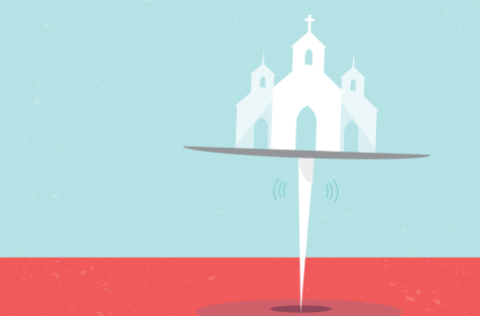 We have passed a new milestone in U.S. history — for the first time, the majority of Americans do not belong to a church, mosque or synagogue. According to a recent Gallup study, membership in houses of worship dropped to 47 percent in 2020, a sharp decline from 70 percent in 1999. That is a marked change from nearly 60 years of consistent membership, since Gallup’s first survey in 1937.

FAITH conducted a survey of diocesan leaders, and their responses reflect a local knowledge of what this national survey showed — there are not as many people in our pews. That means some of our children, our brothers and sisters, our parents and our friends are not there to hear the Gospel, to be in community with us and to receive Jesus in the Eucharist.

But the pandemic has accelerated the drop — those who may have attended Mass out of habit lost that habit after a year or more of being unable to attend, and many of them aren’t planning to return at the same levels they did in the past. According to a study done by The Center for Applied Research in the Apostolate (CARA), 36 percent of young people who attended Mass prior to the pandemic plan to attend less frequently in the future.

If this trend continues, analysts speculate that a 10-year rate of decline will have been compressed into one year.

So while they say their faith is strong, their connection with the Church is less than it was.

What are we to do? Some quote Pope Benedict’s (then Father Josef Ratzinger) 1969 interview in which he predicted a smaller Church that would “issue from those whose roots are deep and who live from the pure fullness of their faith.” In other words, a smaller and more adherent Church. While it is undeniably true that we are in a secular age, the future pope’s words were a prophecy, not a prescription. That smaller core of true believers is, like the first disciples, called to fulfill the Great Commission in Matthew’s Gospel that rings out across the millennia:

“Go and make disciples of all nations, baptizing them in the name of the Father and of the Son and of the Holy Spirit, and teaching them to obey everything I have commanded you. And surely I am with you always, to the very end of the age.”

There is a temptation to think that, in this era of digital communications, we simply need to put the Gospel message out on the web or Facebook, and we are reaching people, the young in particular. But the numbers do not bear that out. For example, according to CARA, only 25 percent of young adults turned to online or television Masses during the pandemic. At the begin-ning of the pandemic, diocesan websites saw a spike in traffic, often related to people seeking a way to celebrate Easter.

It’s not that we can give up on digital out-reach — we need to use every method at our disposal in this critical time. We are at a tipping point in history; more than ever, we are called to be evangelists.

As most of us know, evangelizing does not always come easily to Catholics — we are not necessarily comfortable with discussing our faith. Often, we’re not even comfortable introducing ourselves to the person sitting in the pew next to us. And yet, as our research found, most people who come into the Catholic Church or who return to it do so as the result of relationships with other people.

THIS IS A PIVOTAL MOMENT IN CHURCH HISTORY —WE ARE NOT REACHING PEOPLE WITH THE MESSAGE OF JESUS CHRIST, AND YET WE MUST.

So how can we help our core members evangelize and minimize their discomfort and reluctance? While the digital arena has been a blessing as we sought to live-stream Masses, it is also notoriously bad as a substitute for evangelization — sometimes causing more confusion than clarity as stridency drowns out the message of Christ.

What we can do is give people the tools they need to evangelize in the context of relationships by giving them what they need to start the conversations and to provide answers to common questions they may be asked. By regularly sending our parishioners inspiring and informational content that they can share with others, we can give them what they need to begin. Without this, many of our Catholics live in a catechetical vacuum — if they do not receive a diocesan publication regularly, 90 percent of them receive no other Catholic content in their homes.

This is a pivotal moment in Church history — we are not reaching people with the message of Jesus Christ, and yet we must. We cannot afford to assume that everyone has heard the message and that we can wait for them to respond — we cannot be complacent. Too many people have heard nothing more about Christ than his name. We are called to invite them to a relationship with him, and as communicators and publishers, we have no greater task.

It’s a new day; let’s try every new way to bring the Gospel to the world.