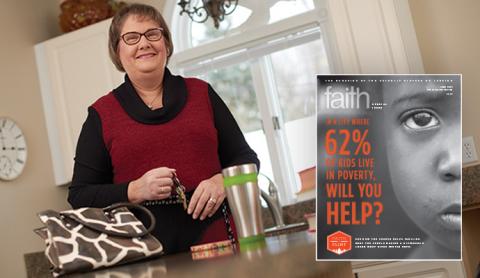 In May 2015, Bishop Earl Boyea launched the Faith in Flint initiative, a campaign to help those struggling with systemic poverty in the city of Flint, Michigan. Situated within the Diocese of Lansing, Flint faces persistently high rates of unemployment and crushing poverty, the result of extraordinary economic and demographic decline over the past 30 years. Complicating matters for the city’s residents, it has been discovered that Flint’s drinking water is tainted with lead and is undrinkable, leveling another crushing blow to an already-suffering community.

At the start of the initiative, Bishop Boyea asked the people in the diocese to:

The June 2015 issue of the diocese’s award-winning magazine, FAITH, was devoted to the Faith in Flint campaign. Through grim statistics and historical photos, as well as inspiring profiles of Flint residents, FAITH conveyed both the need and the hope of this once-great city. In particular, the issue focused on the exceptional progress being made through the Church’s presence in Flint. Quotes and images filled the powerful “Faces of Flint” section – showing the need, promise, dedication and compassion portrayed in the faces of the poor, as well as those who serve them through the Church.

Moved by the stories of real people behind the stereotypes and statistics, parishioners throughout the diocese have responded to Faith in Flint by rallying in great numbers. They have prayed, learned and given of their time and treasure, just as Bishop Boyea implored them to do. They continue to bring the hope of Christ to those most in need. This story is just one testimonial to the power of narrative as employed in the Faith in Flint campaign to reach, inspire and motivate the merciful action of others. Mary Jo's response to a targeted magazine initiative led to her volunteering at a Catholic agency serving the poor Mary Jo Ervin expected her prayers to be answered, but even she was surprised that God’s answers came via her mailbox at her home in Howell, Mich. “I retired from teaching, and I asked God to put something in front of me. I asked him to show me what to do with my retirement.” And he did.

The day when she pulled the FAITH Magazine Faith in Flint issue out of her mailbox last June and read that Bishop Boyea was asking the people of the diocese to help, Mary Jo says, “I knew God was telling me to go.” It only took one visit to the St. Luke N.E.W. Life Center in Flint for Mary Jo to get an idea of what God had in mind. [The N.E.W. Life Center in Flint, Mich. is a faith-based environment providing life skills and workplace training which empower people to become self-sufficient.] “I didn’t initially expect to be there so much. Yet from the very first day, Sister Janice was so welcoming. She’s a 75-year-old sister with a lot of spunk, yet very soft spoken, and she showed me around, and I began.” Mary Jo was moved not only by the other volunteers, but in particular by those she was there to serve. “I had seen the poor, I had served the poor, but I had never consistently been with the poor.

Within two weeks you see someone’s life change – they can go from despair to hope. By the grace of God they come through the doors of the N.E.W. Life Center, and in a short amount of time they have a whole new lease on life. The transformation of the people is amazing.” Although not her only experience with service, Mary Jo notes that this regular, committed, personal volunteer work has given her pause and challenged her to reflect on her own life. “I would tell a younger me to get to know poverty face to face. I would have loved to have worked with the poor sooner. I guess I took so much for granted. God gave me the gift of faith very young. I can remember being in church at six or seven years old on Good Friday and really feeling for Jesus. My Mom and Dad sacrificed a great deal to send me and my three sisters to 12 years of Catholic school. My parents and the way they taught and modeled the faith was a gift. There’s nothing like being a child and seeing your dad kneeling by the side of his bed at night. I was given faith, an education, and the fifty year marriage of my parents. Now looking back, I’m just very grateful.”

Some of that deep gratitude can be attributed to what Mary Jo has noticed in the hearts of those she now spends three days a week with. “The people we help at the N.E.W. Life Center are so grateful, really thankful, very appreciative. I want to imitate the people I serve in their humility and in their courage. Seeing their courage inspires me. Working with the poor is so satisfying. You go home grateful.” Mary Jo has found that much of her own gratitude stems from the relationships she has developed with those who come to the center for a new start. “I believe that people are good at the core. People crave relationships – we are so busy in this world, and really, it’s all about relationships. When people make a commitment to St Luke and we make a commitment to them, they walk in and we know their name, they quickly feel like they belong to something, and people want to belong. What we do is simple – we meet people where they’re at in life.” It is in these relationships that Mary Jo tries to respond to the call that she believes God has given her in her retirement. “I wanted to do something beautiful for God, and I have come to realize that this is done in the very simple service of his people. More than anything, I want people to know that Jesus is merciful. I want them to know that he sees all of the circumstances of their life. What the world knows doesn’t matter, he knows what you’ve been through, how you’ve tried, your commitment to him and others. He sees it all.”