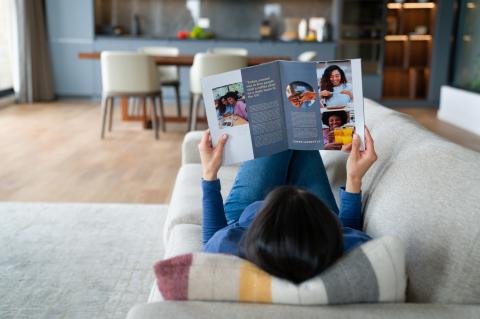 What can Catholic organizations learn from secular associations about nurturing support from members and donors? Perhaps the most important lesson is the value of a membership magazine. According to the American Society of Association Executives, 70% of member organizations use print publications to promote relationships with their members.

At their best, Catholic membership magazines can help build stronger communities of supporters, recognize the contributions of donors, and promote the organizational missions so that readers can act as evangelists for the mission — and ultimately, for Jesus and his Church.

Here are dome examples of Catholic organization magazines that use their print publications for further their mission and nurture their communities:

NCCW was founded in 1920 under the auspices of the United States Council of Catholic Bishops.  The bishops had witnessed the important work done by Catholic women’s organizations during World War I and called for the creation of NCCW to bring together local organizations of Catholic women.  This gave Catholic women in the U.S. a unified voice, a national service program, and the ability to reach out to each other through a national organization. Catholic Woman is a quarterly membership magazine designed to increase participation in engagement with the organization, sharing member profiles, updates about the organization and its leadership, ministry news, service opportunities, and stewardship information.

SOCIETY OF THE LITTLE FLOWER
Between Friends

The mission of the Society of the Little Flower is to promote devotion to St. Thérèse of the Child Jesus, the Carmelite Nun and Doctor of the Church. Through prayers and donations, friends of St. Thérèse enable Carmelites throughout the world to make a difference in people’s lives through Gospel ministries and the education of seminarians, fulfilling her mission to “make God known and loved to the ends of the earth” in the most concrete ways of charity and justice. Between Friends offers members encouragement in their spiritual journeys with features, articles, and columns about the ways in which the Carmelites and St. Thérèse are present in the daily lives of those who claim her as their patron and walk with her in devotion to Jesus Christ.

Catholic Christian Outreach (CCO) is a university student movement dedicated to evangelization. The organization challenges young adults to live in the fullness of the Catholic faith with a strong emphasis on becoming leaders in the renewal of the world. Great Expectations is CCO’s annual membership magazine. The new title reflects the desire and fruit of this publication, to bring hope that young people and the Church are being spiritually awakened and filled with zeal for evangelization. “Great expectations” is also one of CCO’s founding tenets, which expresses hope and confidence in what God will do “through us, with us and in us.”

Guest House was founded in 1956 as the first priest-only inpatient rehabilitation center where clergy could receive treatment with their brother priests with the goal of achieving sobriety and returning to active ministry. Today, Guest House continues its mission of restoring health and wholeness to clergy as well as women religious, with specific treatment centers for both men and women. Human Development magazine is a quarterly publication for people involved in the work of fostering the human and spiritual growth of others. This includes persons involved in religious leadership and formation, spiritual direction, pastoral care, education, counseling, health care, and those interested in the development of the whole person.

Theresians International is a contemporary organization for Catholic and Christian women. Founded in 1961 in Pueblo, Colo., Theresians is named for Saint Thérèse of Lisieux. Members of the organization commit themselves to community, prayer, service, and building up the community of women through a covenant of participation so that all members might reach their full potential as Theresian women. International Dimensions, published annually, connects worldwide members of the Theresians community with profiles, features, news, stewardship recognition, and updates about the organization and its leadership.

The Passionists are a Roman Catholic religious order of vowed priests and brothers, sisters and nuns operating with the full support and approval of the Vatican and the Holy Father. Their mission is the communication of the saving message of the Cross of Jesus Christ.  Passionists are scholars, preachers, spiritual directors, retreat masters, teachers, chaplains, authors, musicians, artists, researchers, gardeners, poets and ministers to the suffering people of the world. Passionist Magazine, published two times per year, helps dedicated supporters and donors of the Passionists stay connected with the Order and its members with feature stories, profiles, and stories of Christian witness as told through the men and women of the Passionists.

NATIONAL SHRINE OF THE LITTLE FLOWER
The Rose

The Dominican Sisters of Sparkill are part of the worldwide Dominican Family founded by St. Dominic in the 13th century. Since their founding by Alice Mary Thorpe in 1876 to care for destitute women and children in New York City, they have continued to serve the people of New York, as well as people in other parts of the U. S. and around the world. More than 250 Sisters and Associates are committed to bringing the Good News of the Gospel to others by the witness of their lives and compassionate service. Weavings, published two times per year, is a stewardship magazine that connects donors to the important work of the Order. In addition to highlighting the Sisters and Associates, the magazine also features profiles of supporters and their stories of commitment to the mission and ministry of the Order.