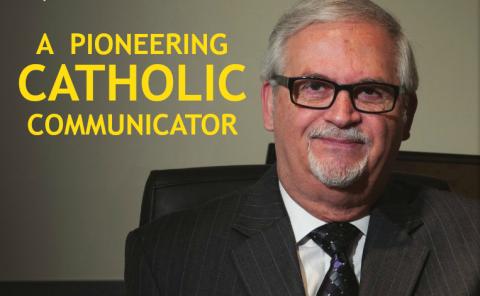 In 1991, when Frank Morock accepted the position of director of communications for the Diocese of Raleigh, he didn’t expect to stay. “After 20 years in broadcast journalism, the last half of it in the daily struggles of news management, I was beginning to feel worn out,” he recalls. “The diocese was looking for someone with broadcast experience to head up a department with a new TV studio and satellite capability to produce both local and national programs. So I figured I'd stay three years, help the diocese gets its system operating, recharge my batteries and get back into broadcasting.”

God had other plans. When Frank was hired, his primary function was to oversee the department, which included the newspaper that was being published 35 times a year; to provide internal communications to clergy and parishes; to develop a broadcast presence; and to provide public relations and marketing guidance to the diocesan offices.

While those duties remained part of the job, the introduction of the Internet in the 1990s began to make the work easier as well as more challenging. Frank explains, “The Diocese of Raleigh was the first to have a website and the first diocese to post a Mass on the Internet. The constantly changing technology provided new ways of reaching not only the faithful, but the larger community and the world. I recall receiving emails from people in Australia and China who were watching our programs and website as early as 1995.”

By then, Frank realized that “what I was doing was more than a job, it was a ministry. It was enriching and fulfilling and allowed me to learn more about my faith and about the many beneficial ministries in the Church that so many people are not aware of. So while I was evangelizing, I was being evangelized.”

One of Frank’s most important times of service to his diocese was during one of the saddest times for the Church. He explains, “The sex abuse crisis of 2002 brought a realization to many dioceses that a solid relationship between the communications director and the media was important, where both the Church and the media knew the other's role and dealt with each other respectfully.

“One of the most important functions a communications director can provide is credibility on behalf of the bishop; credibility to the faithful, the media, and through the media to the larger public.” In Frank’s 22 years with the Diocese of Raleigh, that credibility was never in doubt. His experience and gifts enabled him to provide the two bishops he served with consultation and guidance in times of crisis and during more joyful times when the Church had reason to promote its good works.

A new chapter in Raleigh’s communications and evangelization efforts began in 2004, when the diocese replaced its nearly 60-year-old newspaper with a magazine. “We were starting a search for a new editor for our newspaper,” Frank recalls. “I was attending a meeting in Lansing when I learned of the magazine that the Lansing diocese had begun, and it drew my interest. Raleigh had just completed a survey of its newspaper readership and learned that the average reader was 62, and many parishioners rarely got past the front page. Additionally, the paper had reduced its frequency to 12 issues a year.

“When I returned to Raleigh, I brought copies of FAITH Magazine with me, met with the bishop and chancellor, and we agreed to convene a committee of lay and clergy to discuss this option. The decision was to move forward, and from the first issue, the response has been nothing but positive.”

As a leader in the field of diocesan communication, Frank has influenced many others beyond his home diocese through his service in professional organizations:

Asked about his future, Frank describes “retirement” as “not a word that is embedded in my vocabulary. After a few trips, I plan on volunteering my experience to some Catholic organizations that need assistance in promoting their work. I also hope to provide consultation to any diocese that may want to review its communication plan or institute one.”

Frank expressed his deep gratitude to the late Bishop F. Joseph Gossman and to Bishop Michael F. Burbidge, “for giving me the opportunity to use my gifts in a positive way.”

Bishop Burbidge also expressed gratitude for Frank’s “generous sharing of his gifts and talents in communicating the Good News of Jesus Christ. He has been a blessing to the diocese and I wish him and his wife and family much happiness and peace.”