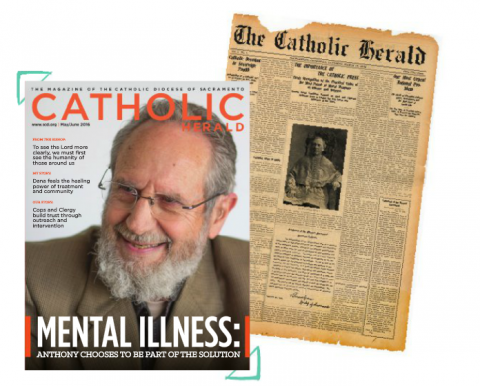 Here are a few publications that have changed a bit through the years, while still preserving their original names. Those names reflect their history, their mission, the legacy they are to the Church.

THE CATHOLIC TRANSCRIPT
ARCHDIOCESE OF HARTFORD

The Catholic Transcript’s first publisher was Archbishop Michael A. Tierney, and its current publisher is Archbishop Leonard Paul Blair. In 2016, Archbishop Blair recognized that readership of all newspapers, secular and religious, was declining. He made the decision to change the format and focus of the Catholic Transcript, moving it to a monthly magazine that reaches all members of the diocese with an emphasis on evangelization and drawing people into a relationship with Christ.

The newspaper’s editor, Roberta Tuttle, continues her role as editor of the new magazine.

Shortly after Bishop Walter Kellenberg was named the ordinary for the Diocese of Rockville Centre, he saw the need for a diocesan newspaper. He wanted to communicate to all the members of his diocese.

In 1962, during the diocese’s fifth anniversary year, The Long Island Catholic was established.

The paper played a key role in educating Catholics about the Second Vatican Council, as well as diocesan news. Msgr. Richard Hanley, the first editor, was committed to making the paper catechetical as well as journalistic.

In December 2012, Bishop William Murphy converted the newspaper to a new magazine, carrying on the legacy of the name Long Island Catholic. In the first issue, Bishop Murphy called on readers to “belong more deeply” to Christ. His hope was that, assisted by this new evangelization tool, parishioners would develop a closer personal relationship with the Lord.

Today, the magazine is headed by Communications Director Sean Dolan.

THE CATHOLIC HERALD
DIOCESE OF SACRAMENTO

In 1908, a Catholic journalist in Sacramento decided that parishioners in the diocese needed a Catholic newspaper. So he made it happen. Thomas A. Connelly launched the Catholic Herald on March 14, 1908. In a letter that appeared on the front page, Bishop Thomas Grace of Sacramento gave his blessing to the privately owned and financed publication.

For more than 20 years, the Catholic Herald reported on local diocesan events, as well as on the struggle for independence in Ireland, which was of supreme interest to local Catholics who had emigrated from Ireland.

In 1929, Connelly died, and Bishop Robert Armstrong affiliated the paper with the Register chain, renaming it the Superior California Catholic Register. In 1947, under the editorial leadership of Msgr. Richard Dwyer, the paper severed its ties with the Register group and once again became the Catholic Herald.

In 1994, Julie Sly was named as the first layperson to edit the newspaper. When Bishop Jaime Soto decided to convert the Catholic Herald to a magazine that focused on evangelization and personal witness stories, Sly continued as its editor and still holds that role. The Catholic Herald is printed bimonthly and reaches more diocesan parishioners than in its recent years as a newspaper.