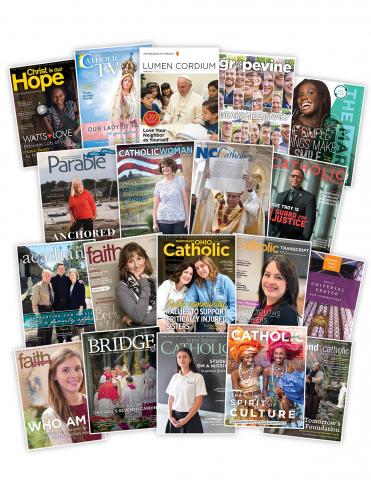 In a span of less than 20 years, FAITH Catholic has grown from one magazine into America’s largest publisher of Catholic periodicals. In the United States, one out of four Catholics receiving a publication from their diocese receives a magazine from Lansing-based FAITH Catholic.

FAITH started in 2000 as a single magazine distributed to members of the Diocese of Lansing. Now, FAITH Catholic publishes 52 print magazine titles with a combined annual circulation of nearly 2 million.

Diocese of Lansing Bishop Earl Boyea made the following statement regarding the publishing company of his diocese reaching this benchmark, “Jesus has called us to go and announce the Gospel of the Lord. FAITH magazine was started in our Diocese of Lansing to assist us in accomplishing this great commission. In only a few years, we were able to turn this one magazine into a publishing service to help dioceses across our country. In years to come, it is our plan to expand this print medium as well as to branch even more into other media as we serve the Church in responding to the Lord’s call.”

O’Brien added, “I thank Bishop Mengeling and Father Charlie Irvin, who made the decision to start FAITH magazine. I thank our current leaders, Bishop Earl Boyea, and our chairman, Father Dwight Ezop, who have both been so supportive and committed to our mission and growth. Mostly, I thank our dedicated and talented staff and freelancers who produce award-winning, inspiring and beautiful publications that lead so many people into a greater relationship with Jesus and his Church.”