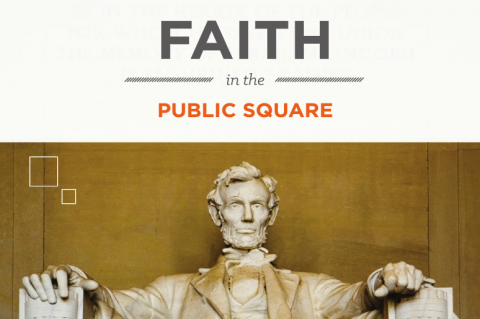 Sometimes, when insomnia gets the better of me, I while away late-night hours on social media sites. It’s fascinating to observe what role people believe religion, specifically Christianity, should have in society. On one hand, there are those who are so determined to keep any mention of Christ out of the public square that they consider Christians to be suspect. For example, a public school district was in the news recently for a clause in their union contract that gave “special consideration” in hiring to those who were of a non-Christian faith. The Christian blogosphere was, correctly, outraged.

But there are some people of faith who think the proper response is to isolate ourselves from society– to forge an alternative that sometimes seems to see the culture as our enemy, rather than brothers and sisters with whom we should be sharing the faith and love of Christ.

As Catholic communicators, we have all seen these extremes – and we know that neither is where we are supposed to be. We are part of society, and as such, we have a responsibility to speak the truth on matters of morals and law. Despite what some would say, we have a right, and even an obligation, to challenge and to encourage.

And we know that our words matter – we can shape people’s opinions and thereby change the course of our civilization. So we have to ask ourselves, “What is the best way to do that?”

Over the previous decades, the Catholic press has addressed issues by reporting – presenting the news from a Catholic perspective. And that was important – but the way people engage with media has changed. In many ways, it’s a return to the way Jesus himself taught – they engage with personal stories. When we share the story of how someone engaged with a “hot button” issue, it captures readers’ attention and lingers in their memory. When we couple these accounts with special reports that also contain the facts and figures, we achieve a bonus – more people actually read the news.

This shift in thinking has had effects that reverberate in our general culture – here are a few examples:

"A Matter of Life or Death,” Parable Magazine
Diocese of Manchester. Jan/Feb 2014

John Breckenridge is a police officer whose partner, Michael Briggs, was killed in the line of duty. Although John really wanted the death penalty for Michael’s killer, his Catholic faith persuaded him to change his position. When he told his story in Parable, a New Hampshire state legislator read it – and changed his mind. During a radio interview, the legislator credited the article with his about-face. The New Hampshire House of Representatives has voted to repeal capital punishment in the state. This is an example of our Catholic teaching – and our telling of an individual’s story – having a concrete effect on public policy.

David Doyle was diagnosed with multiple sclerosis in 1998. Now a wheelchair user, David is active in the fight against the use of embryonic stem cells in research – even though his disease is on the list proponents often tout as being potentially affected by stem cell therapy. In 2008, FAITH Grand Rapids ran a story about David and his faith, and coupled it with a special report that laid out some facts and statistics about embryonic stem cell research – including its lack of success. The special report presented positive adult stem cell results as well. Although the attempt to block further use of embryonic stem cells in Michigan ultimately failed, the Catholic Church was the primary voice of opposition on this critical public policy issue.

Dan is a committed and faith-filled Catholic. He is also gay. Dan shared his faith story with the readers of FAITH, and gave a personal account of what it is like to deal with same-sex attraction. In his own words, “I think, unfortunately, the majority of the gay community reaches the conclusion that there is no place for them in the Church or that ‘The Church hates me,’ but I would argue there is a place for us, and it’s a place where the Church teaches us who we truly are and what it means to be made in the image and likeness of God.” By sharing his deeply personal experience, Dan puts a face on the statistics, and speaks about the hope and welcome that can be found in the Catholic Church for everyone.

"Gift of self: no season required", New Jersey Catholic
Archdiocese of Newark, Dec. 2013

The New Jersey Catholic featured a powerful story about teens who turned their service projects for confirmation into a long-term, life-changing commitment. One teen is involved in an outreach program to the homeless that takes her into Manhattan between 8 p.m. and 2 a.m., where she and other teens distribute sandwiches they’ve made earlier. According to the teens, the faces of some of the homeless people “light up like Christmas trees” when they see the young people. Running along with the inspirational story was a special report on poverty in the United States, which laid out some statistics, along with Church teaching and the response of Catholic Charities. This editorial package effectively promoted the work of Catholic Charities in the United States.

"Jesse and Joseph were saved from abortion", FAITH Magazine
Diocese of Lansing, Dec. 2013

Kathleen Smith participated in 40 Days for life shortly after she miscarried a baby girl. She and her children prayed outside an abortion clinic, and hoped their prayers had saved a baby that day. Months later, St. Vincent Catholic Charities called to ask if she and her husband, Chris, would be foster parents to twin boys who had been born prematurely. They said yes – and in talking with the children’s birth mother, found out she’d scheduled an abortion on the same day Kathleen and her other children were outside the abortion clinic praying. The twins, Jesse and Joseph, are now members of the Smith family – Kathleen and Chris ended up adopting them. We may never know if this story inspires another woman to change her mind about an abortion, but FAITH is a voice for choosing life.

We do know that, as a result of the story, Catholic Charities received phone calls inquiring about foster parent opportunities.