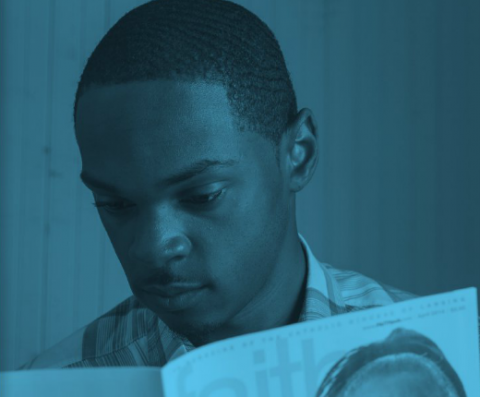 Specifically, we need to make sure the strategies we use to advance our faith meet the moment. And the moment has changed.

A hundred years ago, Catholic immigrants from Europe struggled to find their place in an unfriendly Protestant America. These huddled masses found refuge in their faith. Bishops responded to the needs of the moment in a variety of ways. In addition to building parish churches, they started charities, schools, hospitals and newspapers.

Thank God they did!

However, today’s most successful and effective Catholic schools, charities and publications look different than those of a hundred years ago. The mission hasn’t changed, but every ministry in the Church needs to employ the best practices of our current age to meet the moment.

Today, Catholics face challenges to religious freedoms every bit as critical as a hundred years ago. However, the moment is different now because Catholics are different. The immigrants who built German, Irish or Italian parishes only blocks apart from each other were adherent to the faith. The vast majority of them went to Mass regularly and sent their kids to Catholic schools.

Today’s Catholics are less likely to do either. Instead of being more like the Catholics of a hundred years ago, today’s Catholics seem indistinguishable from Americans overall. Study after study shows they are less adherent and less likely to believe in what the Church teaches. In the 1970s, half of registered Catholics still attended weekend Mass. Now, that number is around 24 percent. That means approximately 76 percent of registered Catholics do not go to Mass each week.++

It has been some time now since St. Pope John Paul II called for a new evangelization. Yet, for most dioceses, the primary way they communicate has not changed. Currently, three out of four dioceses still publish diocesan newspapers – many for more than a hundred years. If diocesan leaders stepped back and asked, "What are the needs of our diocese now?" would they start diocesan newspapers? I think the answer is, most certainly, no.

The moment has changed, and therefore our strategy must change.

The question before bishops, diocesan leaders and communicators is this: Does a diocesan newspaper meet the needs of the moment?

The Pew Research Center’s State of the News Media Report shows specifically what we all can see – that the newspaper industry continues to be in steep decline. Over the past decade, secular newspapers have seen double digit declines in readership and suffered more than a 50 percent decline in ad revenue. In 2014 alone, more than 100 newspapers were sold off at a fraction of their value. When an investor like Jeff Bezos, founder of Amazon.com, buys the assets of these once-great newspapers at a reduced price, it is not a sign of a turn-around for an industry. According to the Pew Center’s Amy Mitchell, “Recent sales of major papers show dramatic devaluation and suggest a tough road ahead for the newspaper industry.”

The diocesan press fares no better. Despite talented and dedicated Catholic journalists, the model is in steep decline. Ten years ago in the United States, there were 163 diocesan newspapers with a combined circulation of 5.9 million. Currently in 2016, there are 135 diocesan newspapers. Since 2006, they have lost a combined circulation of 1.3 million.## It’s no longer enough to continue to do the same thing and then expect a positive change in people toward the Lord.

The moment calls for more than news, it calls for a new evangelization.

It is for this purpose that FAITH Catholic exists — to help connect people with Jesus and his Church. In only the past 15 years, we have grown from one magazine serving a single diocese to publishing about a quarter of the combined circulation of the American diocesan press. Our digital publishing and online services create measurably effective multimedia solutions for dioceses across the country.

Why has FAITH Catholic grown so fast? I think it is because we help our bishop clients with their goals to evangelize, form and inform. It is not about us or ideologies. Our work is tied to the bishops we serve. We help a diocese create a local, custom, print magazine and digital solution to achieve its bishop’s goals. All along the way we serve their communications teams, who still do most of the work.

Mostly, we are able to prove to the bishops we serve that their magazines work. They evangelize, inform and form. How do we know? Every diocese FAITH Catholic serves receives a readership survey of their publication. The results are compelling, especially when you consider that most dioceses choose to invest in sending the magazine for free to every Catholic home.

The 2016 magazine readership survey results for dioceses served by FAITH Catholic show how they are successfully reaching the 76 percent of Catholics who are not at Mass each week and, at the same time, strengthening those who are most committed:

Because of the growth of diocesan magazines as effective evangelization tools, the circulation of the diocesan press in the United States has grown over the past decade by more than 350,000.  The three highest-circulation diocesan publications are published by FAITH Catholic diocesan clients who were looking to invest in evangelization. Because of the diocesan magazine, more Catholics are now receiving a publication from their diocese than 10 years ago. And more dioceses are publishing with print than 10 years ago.

FAITH Catholic readership surveys demonstrate how diocesan magazines have a greater level of engagement than diocesan newspapers. In one of our client dioceses, there was a test of the newspaper model vs. magazine. The staff produced their newspaper one month as usual and then worked with FAITH Catholic on a diocesan magazine the next month. After a year, the survey results showed interest in the magazine was much higher than the newspaper.

Some diocesan leaders may hear that print, whether it is newspaper or magazine, has passed its time. It is too expensive. We simply need to move to the Web and social media.

Again, we can look to secular media for a trend. Unlike newspapers, the overall secular print magazine industry is growing. The number of secular print magazines is greater than a decade ago. Year-over-year audience growth of magazine media is up 10 percent from 2014 to 2015. If evangelization requires persuasion, the magazine is the clear winner. When it comes to influencing people, magazines are the most effective form of media. Magazines outrank the Internet, newspapers, radio and TV in the ability to reach influential people: 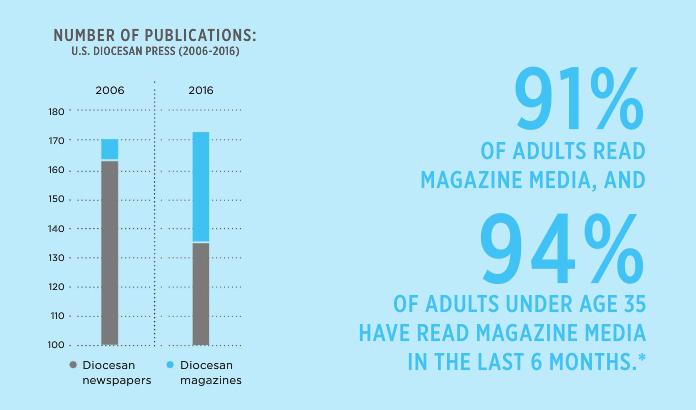 I remember a quote I once heard about diocesan evangelization, “Nobody else will evangelize your diocese but you.” One of the most effective, well-known and respected Catholic evangelists of our age is Bishop Robert Barron. He has 100,000 Twitter followers and 1.2 million likes on Facebook. In the United States, CARA’s survey of self-identified Catholics puts the number around 82 million. Statistically, one of our top evangelists is directly connected with only 1.4 percent of Catholics, assuming all of his Facebook followers are Catholic. And that doesn’t even count the 25 million adults who consider themselves former Catholics.

Diocesan social media are not reaching very many people yet. The average diocesan Facebook page only has 2,581 followers. Facebook has made it harder than ever to have a post reach followers without paying. Some reports indicate that only five to 16 percent of followers even have a post appear from an organization they are following. The average number of Twitter followers on diocesan social media is 3,014. Again, estimates are that only 18 percent of tweets are displayed for followers of organizations without the organization paying. Social media reports in most dioceses will confirm that there are rare instances where a post gets traction organically.

Don’t get me wrong. I’m not claiming evangelization is as simple as mailing out a magazine. However, I firmly believe from the experience of more than two dozen dioceses, and from the research we have conducted, that there is no more effective way to reach the most number of Catholics with substantive, consistently delivered messages from the Church than a diocesan magazine from FAITH Catholic.

If and when there is a better way to evangelize with content, FAITH Catholic will be there. Which brings me to my final point about the type of evangelization this is. The work of the new evangelization is personal. It occurs in small faith groups, at men’s and women’s conferences and in ecclesial communities. It happens when disciples bear witness to the Gospel message of Jesus Christ. There are different types of evangelization. Bishop Barron is a different sort of evangelist than the street evangelist on the corner. The volunteer at a Catholic soup kitchen is a different sort of evangelist than the priest or pastoral minister comforting the family of a loved one. For us to reach the 76 percent of Catholics, who are no longer fully engaged in the life of the Church, we need to empower the 24 percent to grow as disciples and evangelize.

Content evangelization is when content – articles, columns, images, videos and any form of media past, present or future – is used to form people who then go out and evangelize using that content.

What can your diocese do to reach the 76 percent of Catholics who no longer go to Mass each week while at the same time sustain those who are most faithful? If we do not change our strategy, how will we change this reality? How will we achieve our mission to “go, therefore, and make disciples of all nations”? MT 28:19

At the end of the day, diocesan leaders may think they simply can’t afford to invest in reaching all Catholic homes. Of course, I think you can’t afford not to. But, that is easy for me to say. These declines have placed tough choices before many dioceses. However, the smallest dioceses in the country, as well as some of the largest, have made this switch. You can too. It’s more affordable than you think.

I make this offer to each you reading this now: I personally will make myself available for a consultation for your diocese. We can visit over the phone or I can make a personal visit to you. Our mission is too important to keep doing what we’ve always done. This is our time to pass on the faith. Let’s make the most of the moment.

## FAITH Catholic research included circulation information from the 2006 and 2016 Catholic press directory as well as diocesan websites. A few of dioceses did not post publication circulation statistics and therefore the total numbers do not account for those.

*GfK MRI, Spring 2014 The Association of Magazine Media 2015 report. Category influentials are defined as people who have a great experience in this topic and whose advice on this topic is trusted by friends and family members.

#CARA Center for Applied Research in the Apostolate 2012 Catholic New Media Use.