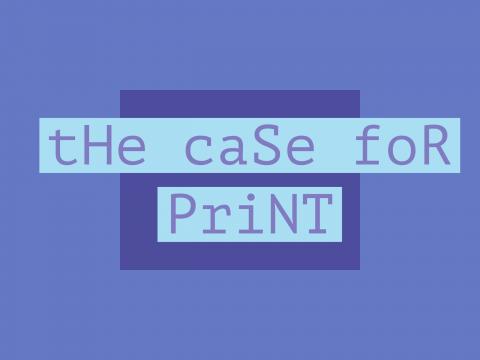 Is your diocese or Catholic organization questioning the value of its print publication? Since the onset of the coronavirus pandemic, many church leaders think it’s time to save money and switch to fully digital publishing. But FAITH Catholic’s president and CEO Patrick O’Brien believes this is wrong.

According to O'Brien, “It is true that we live in the digital age. Almost all Catholics are online, but very few follow anything Catholic online. That is why a print magazine is still the most effective way for the Church to get Catholic content into the home.” O'Brien shared this observation and many others in his presentation, The Case for Print: Why Print is Still Essential for Catholic Dioceses and Organizations, given at the first-ever virtual Catholic Media Conference (CMC) on July 2.

Some people maintain that print is obsolete now that people are living in the digital age. "Print is dead," we're told. Typical arguments against a diocesan or organizational publication include the expense, especially compared to digital communications; the growth of social media platforms like Facebook, Twitter, Instagram and YouTube; the delay in getting news and information out because of the time it takes to print and distribute a publication; environmental concerns about using paper and; and the lack of engagement and measurement that people assume about print.

O'Brien acknowledged that financial concerns brought on by the Covid-19 crisis accelerated the demise of several Catholic publications, including diocesan publications. “Closing down a Catholic print publication is a mistake,” O’Brien said, citing recent research by FAITH Catholic that confirmed earlier research conducted by CARA. "People are erroneously assuming that Catholics are engaging with their dioceses and other Catholic organizations online. And while it's true that 90 percent of people are online, only 17 percent of Catholics engage with Catholic television or radio, 14 percent visit Catholic websites, 12 percent open email from a Catholic organization, and only 12 percent of Catholics engage with Catholic social media."

"Put another way," O'Brien said, "while Church leaders may think it's great that digital engagement is growing, 88 percent of Catholics still don't engage with Catholic social media or open emails from a Catholic organization, 86 percent don't ever go to a Catholic website, 83 percent don't watch or listen to Catholic TV or radio. The overwhelming majority of Catholics aren't using the internet to engage with the Church or their faith."

The most important takeaway from O’Brien’s presentation is that, "Catholic communicators need help to provide their bishops and leaders with the facts about how crucial it is to continue to produce print publications, especially now, when people can't engage with their parishes. A diocesan magazine can offer 'air cover' to help parishes keep Catholics thinking about their faith, especially those who already were sporadic in their Mass attendance and participation. Our goal was to offer the research and arguments that communicators can take to their leaders to help them make informed decisions about how to communicate now, and in the future."

For the first time, the Catholic Presso'Brien's  Association has made the virtual CMC available to anyone, free of charge. Videos of the sessions are available for those who couldn't attend.